Does the Brain Read Chinese or Spanish the Same Way It Reads English?

First, let us talk about alphabetic orthographies. There are several different alphabets that are used to create written languages. For example, English uses the Latin alphabet, and 26 symbols, or letters, to represent the spoken language. Norwegian and Slovak also use the Latin alphabet, or the same set of symbols, but Norwegian includes three vowels not used in English (å, æ, ø) and Slovak uses a series of accent marks to indicate how a letter is spoken (for example, ó or š), resulting in the use of 46 symbols to represent the spoken language. Most European languages, including English, French, Spanish, Italian, Dutch, Norwegian, German, Portuguese, Czech, Slovak, Hungarian, Polish, Danish, Welsh, Swedish, Icelandic, Finnish, and Turkish, use the Latin alphabet [1].

There are other alphabets that use different sets of symbols to represent the spoken language, but still code the language at the level of the phoneme. These alphabets include the Cyrillic alphabet, which is used for the Russian, Bulgarian, and Ukrainian languages; the Devanagari alphabet, which is used for Hindi, one of the official languages of India, the Greek alphabet, which is only used for the Greek language, and the Hangul alphabet, which is used for the Korean language. Some languages, such as Serbo-Croat, use both the Latin and the Cyrillic alphabets. An alphabetic orthographythat only contains consonants, and not vowels, is called an “abjad.” Hebrew and Arabic are sometimes classified as abjads, because vowels traditionally are not included when writing. However, today, we often use accent marks to show where a vowel should be, leading many people to classify both Hebrew and Arabic as alphabets, not abjads. In Figure 1, you can compare several different alphabetic (and non-alphabetic) orthographies used to write out the same statement: “I think I can.” 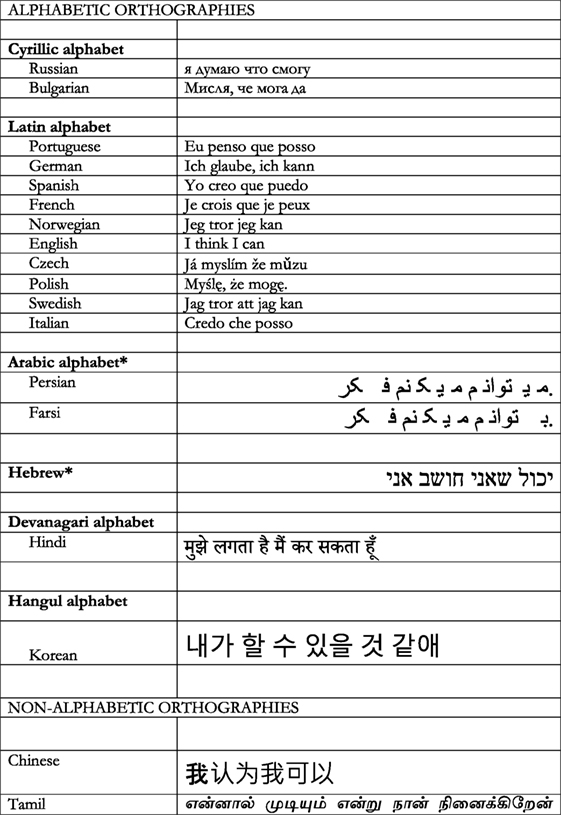 Alphabetic orthographies also differ in how well the phonemes (sounds) and the graphemes (symbols or letters) match up. In some languages, such as Spanish, Italian, and German, almost every letter represents only one sound. When each letter is always pronounced exactly the same way, the mapping is said to be “consistent” and the orthography is called “shallow.” In other languages, such as English and Danish, a letter can have many pronunciations, such as the two different/c/sounds in “circus.” In this case, the mapping is said to be “inconsistent,” and the orthography is called “deep.” Thus, Spanish is a consistent or shallow orthography, and English is an inconsistent or deep orthography. Although not everyone agrees on how to compare the consistencies between letters and sounds across languages, researchers generally agree that Finnish, Greek, Italian, Spanish, German, Serbo-Croat, Turkish, and Korean are relatively shallow or consistent orthographies, while Portuguese, French, and Danish contain more inconsistent mappings between phonemes and graphemes. English is the most inconsistent language in the world!

Now, let us talk about non-alphabetic orthographies. Non-alphabetic orthographies represent either the syllable (for example, Cherokee, Tamil, or Japanese Kana) or a one-syllable unit of meaning (as in Chinese, Japanese Kanji) with each symbol. Similar to the alphabetic orthographies, a unit of spoken language is represented by a symbol, but in the non-alphabetic orthographies, unlike the alphabetic ones, that unit of spoken language is larger than just a phoneme. Chinese is often referred to as a pictograph (a language made up of pictures), because people think that the characters are pictures of the words they represent. In fact, very few Chinese characters are actually pictures of the words they represent. Rather, in Chinese, the symbols represent a unit of pronunciation (a syllable) that is also a unit of meaning (a morpheme), thus Chinese is considered a morpho-syllabic writing system. Approximately 80–90% of Chinese characters also contain what is called a phonetic radical. A phonetic radical is just one part of the character that provides a clue as to how to say the word. You can see examples of Chinese and Tamil in Figure 1.

IS LEARNING TO READ HARDER IN SOME ORTHOGRAPHIES THAN OTHERS?

DO CHILDREN HAVE DIFFERENT READING PROBLEMS IN DIFFERENT ORTHOGRAPHIES?

Children who have great difficulty learning to read may have a learning problem known as developmental dyslexia. Children with dyslexia are not able to read as well as other kids who are the same age. Also, their difficulties with reading are not because of poor teaching, poor sight or hearing, or because of other brain disorders. It is believed that about 5% of children in all languages have severe reading problems.

IS THERE A UNIVERSAL BRAIN NETWORK FOR READING ACROSS ORTHOGRAPHIES?

Even though there are differences in how quickly children learn to read and in the reading problems children have in different orthographies, there is reason to believe that reading in all languages uses some of the same areas of the brain. The first step when reading in any language is looking at and analyzing the printed word. Also, all orthographies represent spoken language, which suggests that phonological decoding, or figuring out which sounds the symbols represent, is required for all reading. Brain imaging studies, in which special equipment is used to take “pictures” of the brain, can tell us a lot about how the brain reads different orthographies. The most common brain imaging techniques used to explore the reading of languages are called functional magnetic resonance imaging (fMRI) and positron emission tomography (PET) scans. Both fMRI and PET scans create pictures of the brain when it is working on a task, enabling researchers to see which areas of the brain are being used when you are reading. Using these tools to compare brain activity when a person is reading different orthographies, researchers can identify brain regions that are used when reading allorthographies, and brain regions that are used only when reading specific orthographies.

One group of researchers identified three areas in the left hemisphere (or side) of the brain that are used when reading in all orthographies studied [5]. These researchers combined the results of 43 different fMRI and PET studies of reading in several different languages, including English, French, Italian, German, Danish, Chinese, Japanese Kana, and Japanese Kanji. The three brain regions used in all orthographies were a region at the top of the left temporal lobe toward the back of the brain called the temporal–parietal area, which may be involved in phonological decoding, a region along the bottom of the left frontal lobe called the inferior frontal gyrus, and the visual word form area (VWFA). The VWFA is a region of the fusiform gyrus, which is located along the bottom of the temporal and occipital lobes in the left hemisphere of the cerebral cortex (see Figure 2). The VWFA is believed to be used only when we see written letters and words, and not when we see other objects, and the VWFA has been found to be involved in reading in all orthographies studied so far [6]. 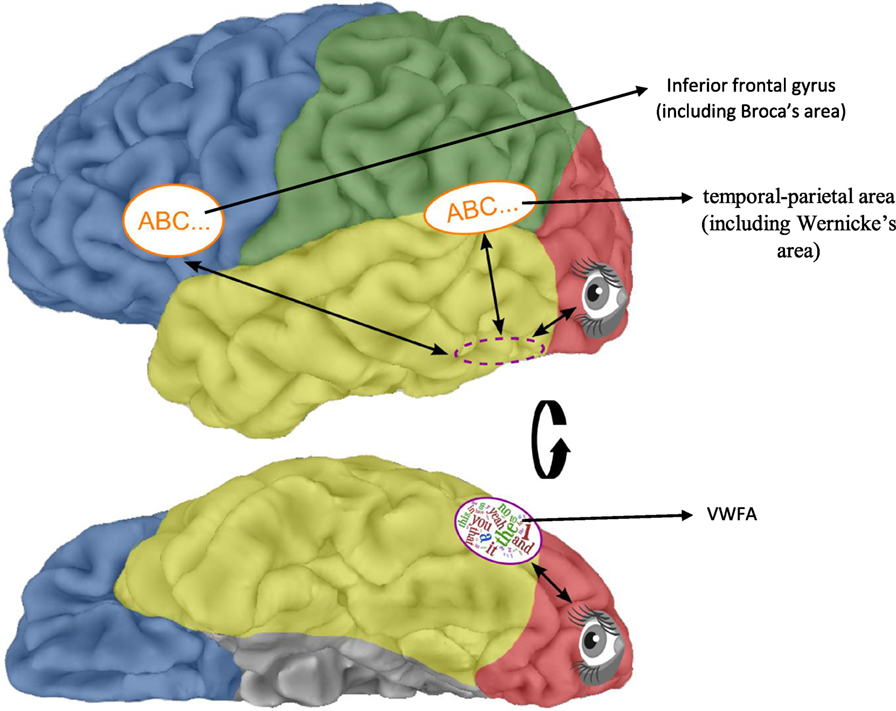 Reading is a complex task, and a relatively new skill for the human species. It is likely that some regions of the brain have, over time, become adapted for, or better at, the task of reading. Research shows that there are some common brain areas involved in reading across all languages, areas that are involved in visual recognition of the symbols and figuring out which sounds the symbols represent. However, specialized areas of the brain also exist, which support the particular skills needed to read a specific orthography. Most research studies to date have focused on alphabetic orthographies, and mostly orthographies that are based on the Latin alphabet. Further research is needed to explore reading in other orthographies if we are to know for sure whether the brain reads all languages the same way.

Orthography: The symbols used to represent a spoken language.

Phonological decoding: Converting written symbols into the sounds they represent.

The authors declare that the research was conducted in the absence of any commercial or financial relationships that could be construed as a potential conflict of interest.

This is an open-access article distributed under the terms of the Creative Commons Attribution License (CC BY). The use, distribution or reproduction in other forums is permitted, provided the original author(s) and the copyright owner(s) are credited and that the original publication in this journal is cited, in accordance with accepted academic practice. No use, distribution or reproduction is permitted which does not comply with these terms.

5 Free Online Learning Programs for Kids to Do at Home