In a recent press conference on the COVID-19 situation, Prime Minister Scott Morrison told Australia schools would remain open for the foreseeable future. He said:

The health advice here, supported by all the Premiers, all the Chief Ministers and my Government is that schools should remain open […] I am asking all other parents around the country […] There’s only one reason your kids shouldn’t be going to school and that is if they are unwell.

But many parents are keeping their children home. Some are doing this in an effort to “flatten the curve”, and others may be worried for the health of their child or elderly relatives.

Attendance in schools across Australia has fallen, by as much as 50% in some. Considering parents are going against the directive of governments, are they breaking the law by taking their kids out of school to study at home?

On the face of it, the answer is yes. But it’s not black and white, and the likelihood of criminal proceedings is traditionally very low. Fining parents has always been considered a last resort, and that would seem unlikely to change in a time like now.

But the law is the law, and is there for a specific social purpose – it is never advisable to willingly and persistently ignore it.

What does the law say?

School education is governed by state and territory laws that mandate compulsory education. Parents are legally obliged to ensure their child attends school (or other educational options such as homeschooling) every school day, unless the parent has a reasonable excuse.

The maximum fine that can be issued to a parent varies considerably across jurisdictions. If a parent was to face court (normally this would be for persistent non-attendance), the fine in Queensland can be up to A$800, whereas in New South Wales, it could be $2,750.

But again, prosecuting parents will not usually be the first response, and these figures are the maximum a court may impose. Many states either suggest or require warnings, notices, meetings or conferences before a case can be recommended for prosecution.

Is COVID-19 a ‘reasonable excuse’?

Most jurisdictions provide for a reasonable excuse to be given, and then often provide a few examples of what this might cover. If a child is actually sick, this would often be listed as an acceptable reason for their absence.

Similarly, six of the jurisdictions (ACT, NSW, NT, Qld, Tas, WA) specifically mention a defence where the child is required to stay home due to a public health direction. The current direction of governments is for healthy children to go to school. But this defence could cover a situation where a family member is confirmed to have COVID-19, or the child has recently returned from overseas, and therefore needs to self-quarantine for 14 days.

Important advice from Vic Chief Health Officer. We will continue to be guided by the experts, this is why our schools currently remain open. Principals, teachers & support staff in government, Catholic and independent schools are doing an amazing job. Thank you! 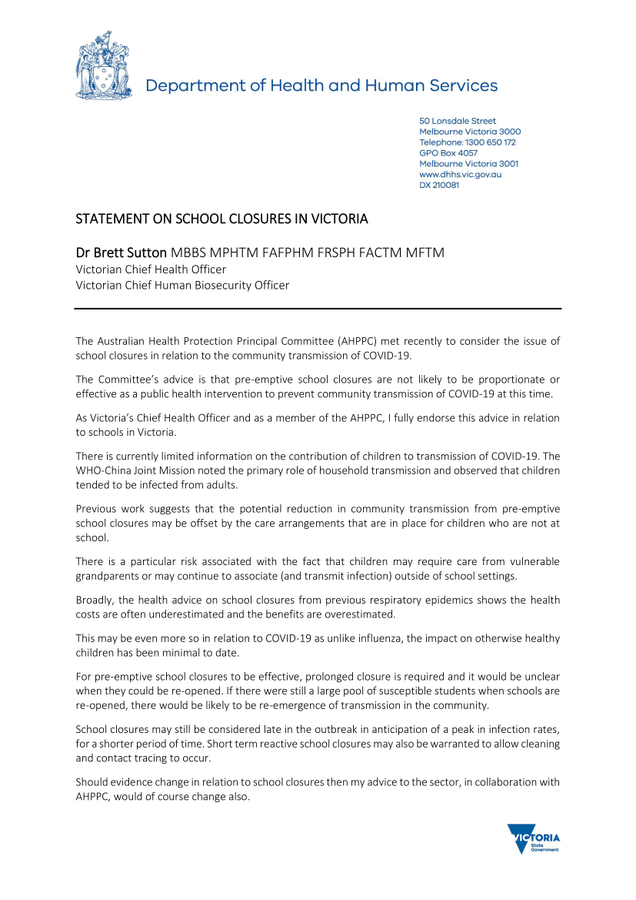 South Australia has a new Act which could allow a parent to keep a healthy child at home to prevent the risk of the child catching a disease; however this law has not yet begun to operate.

Without there being any specific and obvious defence for parents, it would come down to whether removing a child from school due to the threat of COVID-19 is considered a “reasonable” excuse.

In a worst-case scenario, it would be a court that would ultimately decide this question. But there are a range of decision-makers involved in school non-attendance cases who precede a court, including school principals.

Parents could apply for an exemption to their obligations in advance of their child’s absence. Decision-makers for exemptions vary between jurisdictions, and sometimes even within a jurisdiction depending on whether the child is at a state or non-state school.

A factor that might make it more reasonable for the child to be exempted could be if there are other household members who fit into high-risk categories (for example, someone who is immuno-compromised). Also relevant might be what provision has been made for the child once the parent removes them – will the child be doing schoolwork, or playing video-games unsupervised all day?

The prime minister said anything we do we would need to do for six months. This situation isn’t likely to resolve itself anytime soon, and it’s uncertain whether government advice will change with regard to schools.

For now, technically, keeping healthy children at home can be considered illegal. But the likelihood of criminal proceedings is low, and a government decision to prosecute parents would, I imagine, be publicly unpalatable.

5 Free Online Learning Programs for Kids to Do at Home